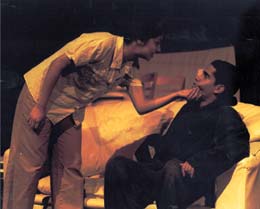 Movimiento Estudiantil de Teatro y Artes or META brought to the University Theater, an empowering and realistic story not only about Latin-Americans, but also about all Americans who have faced the affects of assimilation.

META’s new production “The Migrant Farmworker’s Son,” which opened Friday captured all the drama of today’s modern world, where the word “immigrant” is a social taboo, and it is an everyday struggle to break free from the past while fighting to preserve one’s cultural heritage.

Although the play is mainly a drama, humorous one-liners sprinkled throughout the play brought laughter to the audience. Written by Silvia Gonzales and directed by Emiliano Torres, the balance of tears and laughter ingeniously and successfully gave the play its character.

The play opens with the cast working in the fields when a terrible accident occurs. It goes on to tell a story of a Mexican family’s struggles to unite in a sea of culture clashes. The father, played by Rudy Marquez, longs for Mexico; the mother, played by Dina Jaregui is accused of valuing American culture more than her own, becoming more like a “gringo;” and the lost son with two names– an American and a Mexican– that knows nothing of his heritage.