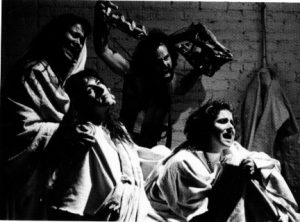 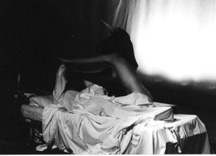 If a woman could be a bullfighter, then Girl would have succeeded. Instead, she teaches a broken, old miserable wannabe.

A broken, wannabe bullfighter buys a painting from a blind man and from the oils a flamenco dancer and guitar player come out of it to sing and dance for him. The boarding house maid appears to be educated in the art of bullfighting and educates him in the techniques. Later they become lovers. However, it is not until he makes love to a minotaur woman is he able to fight in the ring.

A dysfunctional family on Father’s Day subconsciously want to kill each other and do, several times.

It’s Father’s day and everyone gathers to give presents to grandpa and dad. Grandma has an anger-thing going towards grandpa. Grandpa retaliates by shooting her. In that moment of frenzy, all are shocked. Then the action picks up as if nothing happened. This continues with a conflict between dad and mom, and the son and daughter. Then the daughter, has had enough. She puts the gun to head to kill herself. The family tries to talk her out of it, but their heart isn’t really not into it. A play with an anti-gun message.

Produced at Mid Michigan College (1995), and a staged reading a Chicago Dramatists Workshop.