Alicia In Wonder Tierra (or I Can’t Eat Goat Head)

Family Comedy 3-5F, 3-5M multiple set full-length loosely based on Alice in Wonderland, with a touch of The Wizard of Oz, we follow the whirlwind adventures of Alicia, a Hispanic Valley Girl teen.

Alicia, a bratty teen visits a Mexican Imports Curio Shop with her culturally passionate mother. Warned to be careful in the back room by the store keeper, Alicia bumps her head after tripping over Mexican pottery. She then finds herself in a journey through media induced stereotypes and icons which are hilarious comments on today’s multi-cultural society. 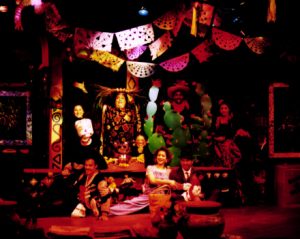 En route she encounters a singing armadillo, a Day of the Dead sugar skull, a soul brother cactus man, the Tree of Heads, s a Mad Hatter-type menudo party, the Maze of Velvet paintings, and is chased by the Elvira gang. Eventually, Alicia discovers she has been chasing her roots. The play is available in full or short length.

“She has delved into her Mexican heritage to create a Latin American parallel to “Alice in Wonderland”…She shows great inventiveness in devising these characters, basing them on familiar figures that are as fanciful and flamboyant as those in Lewis Carroll’s classic.The Coterie production captures very well the play’s ethnic flavor and hallucinatory premise. The colorful costumes and set and the elementary comedy and sight gags please the youngsters, while all of these and the ethnic humor catch the adults.” – Variety